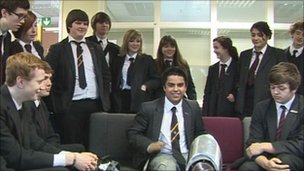 The jeans allow wearers to tap out a tune on their thighs by hitting sensors woven into the fabric.

He received the award at the Big Bang Science Fair, held earlier this month in London.
‘Lot of interest’

Aseem said that the invention was a fusion of his twin passions of drumming and electronics. The final product was designed as a practical solution to a problem he found as a musician.

He explained: “There’s always been a problem with drum kits being so heavy.

“I have a band and we gig. Every time we go to a place we have to take the drum kit in the car first and then come back with everybody else – so it’s a bit of a hassle.

“I think at the time I might have been tapping on my legs, and I thought, I know why don’t I see if I can put a drum kit in my trousers.”

He will now go on to represent the UK at a science and engineering fair in Los Angeles in May.

Adam Young, head of design technology at Hymers College, said: “I think he is going to go very far with this design.

“It’s very commercial and it’s got a lot of interest. I think he could take it further,” he said.

It is the second time the Year 13 student has won a prize at the event for one of his inventions.

Last year, Aseem won the intermediate title at the same competition with a set of drums that light up when hit.

Emily Bentley, a Year 12 pupil at the school, also won three prizes for designing a rucksack alarm system that plays a tune when a young child wanders too far from their parents.”