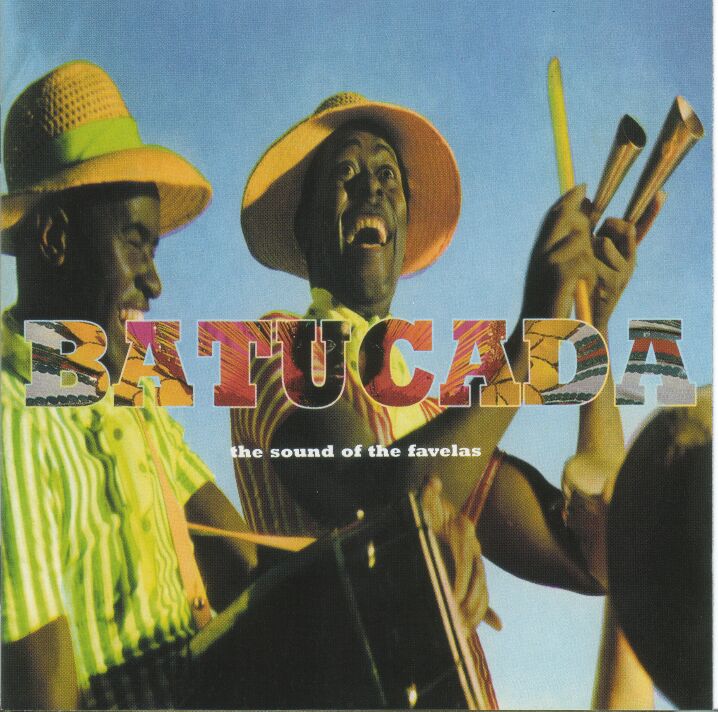 Batucada is a Brazilian form of percussion carried out by a bateria, or percussion or rhythm section in Portugese and Spanish. Batucada is known for its fast pace and repetition. You may remember the word bateria from the post on Fernanda Terra and the ladies of Encontro de Bateras or Meeting of Drummers, translated literally. Common instruments include:

Repinique, a high-pitched tom-tom whose player is traditionally the leader of the ensemble.
Surdo, a large drum with an average size of 50 cm in diameter. It provides the downbeat, the bass downbeat of the rhythm. When only one surdo is playing, it accentuates the 2nd and 4th beat of every measure. When a second surdo is playing, it is tuned slightly higher and is played accentuating the first and third beats of the measure.
Tamborim, a small drum usually played with a stick or a multi-pronged plastic beater.
Bells (agogô, bongo, and cowbell)
Shakers (Ganzá, Afuche, and Maracas) of various types.
Caixa, a thin snare drum.
Cuica, a single headed drum with a stick mounted inside the drum body, perpendicular to the head. The instrument is played by rubbing a damp cloth along the length of this stick, while pressing the head of the drum with a finger or thumb. The closer to the stick the finger is pressed, the higher the pitch of the sound is produced. The cuica creates a unique sound, which can sometimes sound like a human voice.
Timba a long drum that is used to produce low tones in the ensemble. It is usually played with one hand on the head, and the other beating the body of the drum.
Pandeiro, similar to a tambourine and played elaborately with the hand. Unlike the tambourine, the pandeiro can be tuned.
Reco-reco (known in Spanish as the guiro), a usually hollow wooden instrument with a ridged exterior surface that is scraped with a stick.
Apito, a small wooden whistle.

The video below is from El Festival Tensamba 2009 which took place in May in the Canary Islands. It kicks off in Tenerife and spreads throughout the land. This particular performance with an all female Batucada group takes place in Lanzarote. It is one of the biggest showcases of Brazilian music in the world.