There were female drummers before West’s time, like Alice de Buhr of legendary rock (and all-female) band Fanny, Karen Carpenter, and Velvet Underground’s Moe Tucker (not to mention the women of the jazz era, like Pauline Braddy and Viola Smith). But Sandy was a hard hitter, aspiring to John Bonham swagger, and the Runaways aligned more with The Sex Pistols than with the folk and flower power that afflicted the 1960’s and early 70’s. They burst out of leather seams, rebelled against authority, screamed into their microphones, shredded on their instruments, and embodied the era’s teenage discontent.

Sandy West was a California girl, the first female drummer in her elementary school band: “Before I was ten years old, I was trying to teach myself the drums, playing guitar and piano and listening to everything from rock to classical music” (Queens of Noise, Evelyn McDonnell, 14). Of her talent, bandmate Joan Jett praised, “[Sandy] would smash those cymbals…It was very rhythmic and percussive. She kept right in time” (17). West and Jett founded The Runaways together, jamming for the first time when Sandy was only fifteen. She would soon discover how to channel personal trauma, including the loss of her beloved father, into her music to give the band its driving edge. 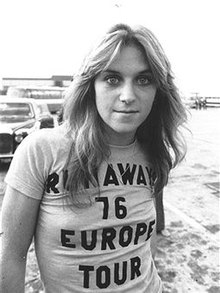 The Runaways define the decade between hippies and hair metal: when disaffected youth ruled Hollywood and when drugs, sex, and glam-punk reigned supreme; before the AIDS epidemic, but after Vietnam; before the economic decline but after a rise in unemployment. Putting on a Runaways album today still feels rebellious; the drums are pounding yet grounding in each song. In the mid 1970’s, five teenaged girls–punk priestess Joan Jett, front-woman Cherie Currie, guitar wizard Lita Ford, bassist Jackie Fox, and Sandy West–demanded and commanded their place in history. They wanted to thrive in a space that had previously been reserved for men: they wanted to be as big as The Beatles or The Stones. In Japan, they may as well have been.

Sadly, mismanagement, the insidiousness of drugs, and tabloid exploitation of the girls’ sexualities quickly led to the band’s demise, especially after Cherie and Jackie left the band in 1977, upon returning from their tour in Japan. Kim Fowley, Svengali of the girls–their notorious manager and producer–has since become an icon of controversy and is often cited as responsible for the abuse experienced by the band. The Runaways officially dissolved in 1979 and unfortunately, West never achieved the subsequent success of her fellow bandmates. Struggling, she eventually resorted to a life of crime to pay her bills and, a heavy smoker, died in 2006 from lung cancer. However, before she even reached adulthood, she reached superstardom with one of the first all-female rock bands. Though The Runaways disbanded before they achieved the critical and commercial success that was rightly owed them in their own time and on their own turf, the legend lives on and Sandy West’s role in rock music history should not be overlooked or overstated.

The popularity of the band was recently revitalized by the 2010 movie The Runaways starring Kirsten Stewart and Dakota Fanning (as Joan Jett and Cherie Currie respectively), but West’s role in its foundation is diminished. In the controversial (among the band’s divided members) documentary Edgeplay; A Film about the Runaways, produced and directed by former Runaways bassist Vickie Blue, Sandy West is featured throughout detailing her history with the band and her love of the drums. Be sure to check it out and form your own opinion!

Watch the band’s infamous live performance of “Cherry Bomb” in Japan below: