This is a feature of ours where we get one of our favorite drummers (whose dad happens to be a drummer too) to interview eachother! AH! So cute. Here’s Kasey Peters and her dad, Tony:
My dad is a jazz drummer and I learned to play by watching him.  He gigged in jazz trios at dinner clubs in Los Angeles and took me to see Buddy Rich and Louie Bellson when I was a little girl.  We would watch drummers together on laserdiscs and any time there was music playing he’d turn up the volume when there was a drum solo.  Today, I run a drum teaching studio in the UK.  My dad’s 82 and still has a bash on the drums every morning.  He says he’s finally happy with his left hand.  I hope I’ll be the same at his age! 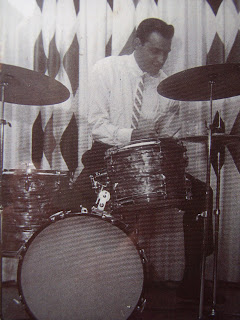 Kasey: How did you come to play the drums?
Tony: I always loved music and wanted to be a musician so I chose the drums thinking they’d be the easiest to learn (we laugh heartily).  I was 18 when I started lessons with George Jenkins, who was sometimes called  ‘King of the Drums’ having been married to Dinah Washington, who was known as ‘Queen of the Blues’.  He had mostly been affiliated with Lionel Hampton in the 1940s but also had stints with Louis Armstrong’s All Stars and Erroll Garner.

Kasey: Were you happy that I was the one who took up drums and not your son?
Tony: I just remember you getting it you know.  You were the one who picked it up and that was okay by me.  I don’t remember ever actually showing you how to do anything.  It was like you were growing up in a bilingual household surrounded by a second language.

Kasey: There are a few drummers in our family besides us.  Do you think it’s in our Italian genes?
Tony: I don’t know about that.  Maybe it’s just coincidence.  Do you ever wonder if you’d be a drummer today if you’d grown up in a family without drummers?  Nature, nurture; tomato, tomahto! 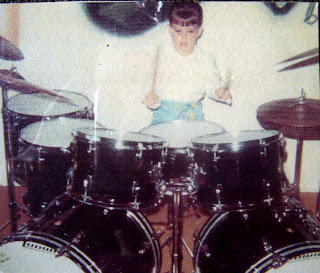 Tony: I don’t read drum music.  How did you learn to?
Kasey: Those piano lessons paid off!  And rhythm is rhythm.  There are fewer notes to memorise on the stave, but coordinating four limbs more than makes up for that.  Plus I wanted to teach and have as many resources as possible.  Reading is great for referencing, recall and understanding.  Also in the UK, we have drum exams to assess playing where you have to read and play along to notated pieces.  I help students pass their graded exams.Tony: What can you remember about playing at a young age?
Kasey: I was seven when you and mom divorced but I was happy that you left one half of your double 1960s Ludwig kit behind (I so wish you still had that kit!).  But I no longer had you there to watch.  Piano lessons when I was a little older helped with music theory, but as far as the drums go, I suppose I taught myself by watching you.

Tony: What are some of your philosophies about playing?
Kasey: There’s often talk amongst drummers about hitting hard (and playing fast) as if that’s inherently good.  For me, there’s a fine line between making music and making noise.  I don’t mind the odd sforzando, but not strictly as a manner of playing.  If you’re into drumming as sport, try playing fast and quietly, that’s much more challenging.  I favour a melodic and harmonic approach with an array of dynamics.  I’m into groove, time-feel, pocket and playing for the song.  Just because something is loud and fast doesn’t necessarily mean it’s good.  Be tasteful, strive for quality of tone, expression, listen to the whole picture, and don’t over season: you can have too much salt in a stew!  Also, try not to get obsessed with gear.  I teach at lots of different schools and some of the best sounding kits are the old battered ones from budget ranges.

Read another Drummers with Drummer Dads